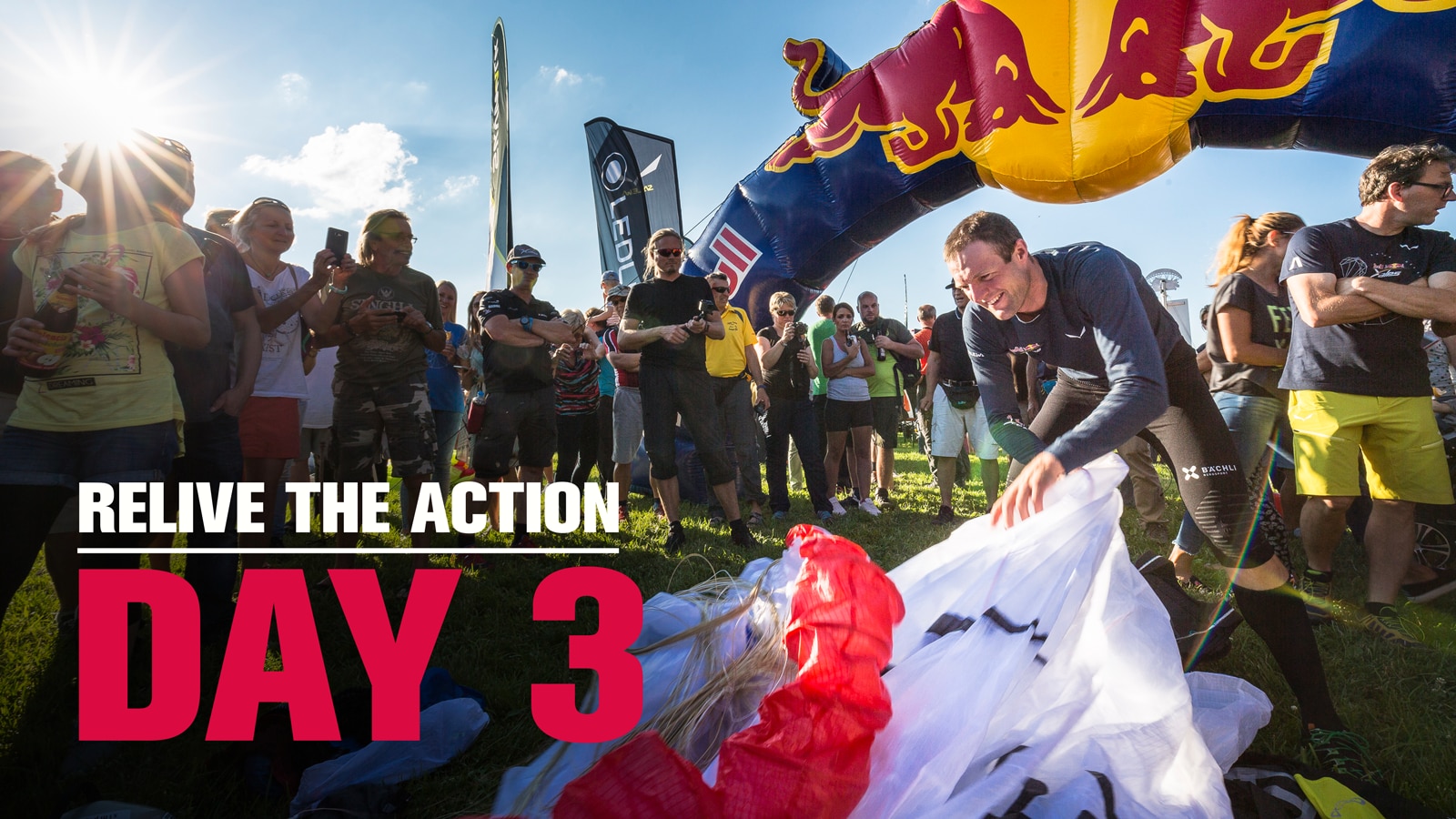 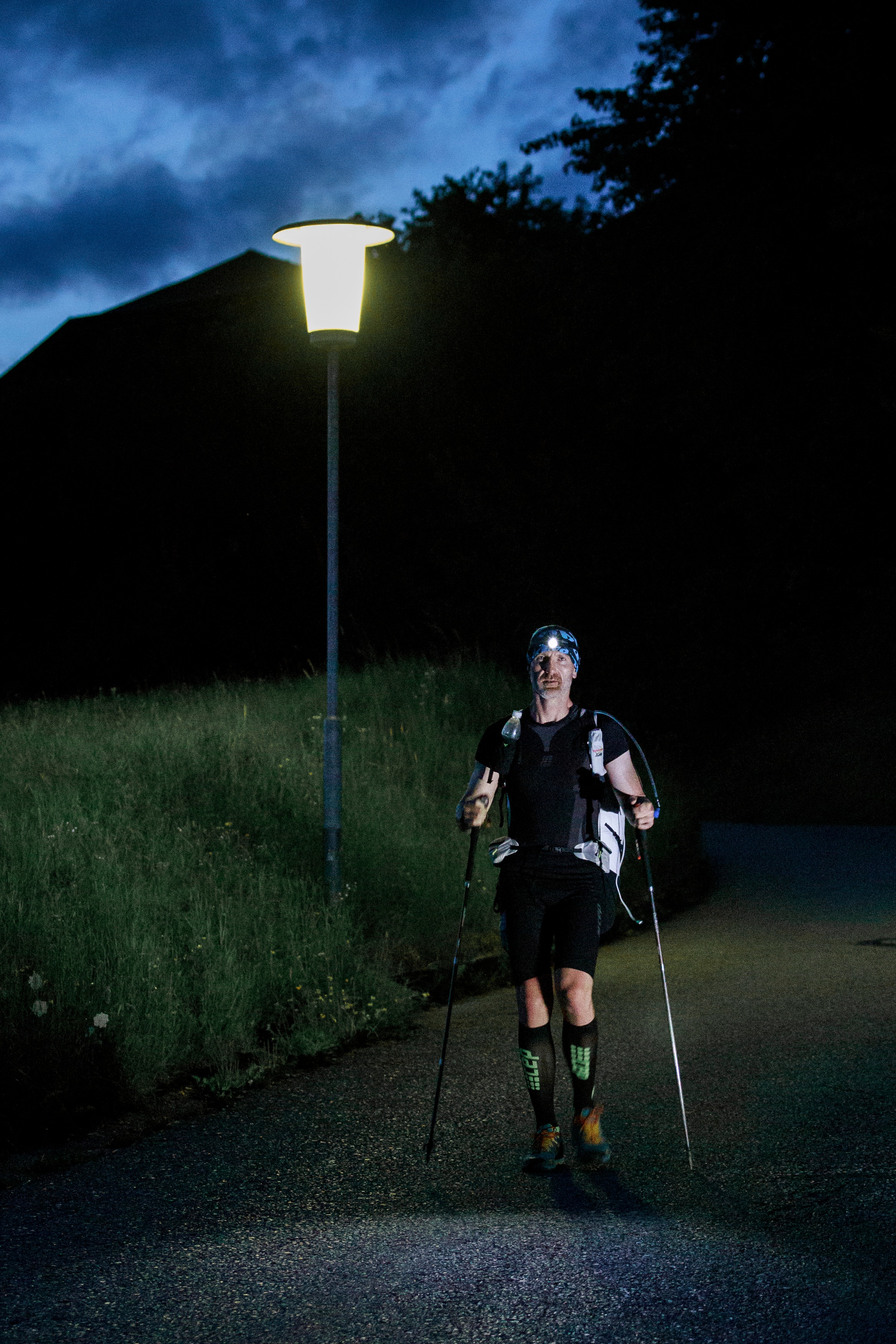 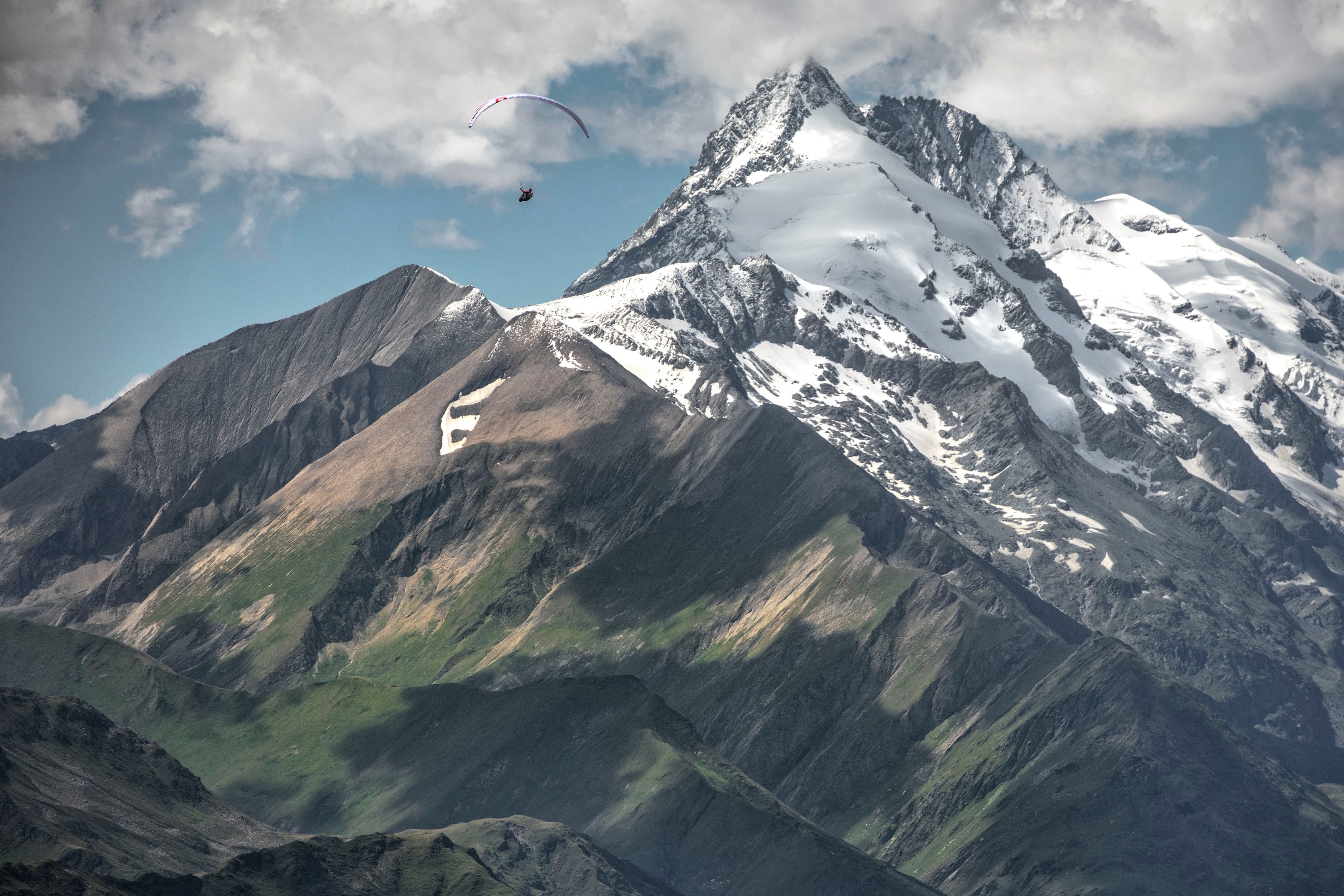 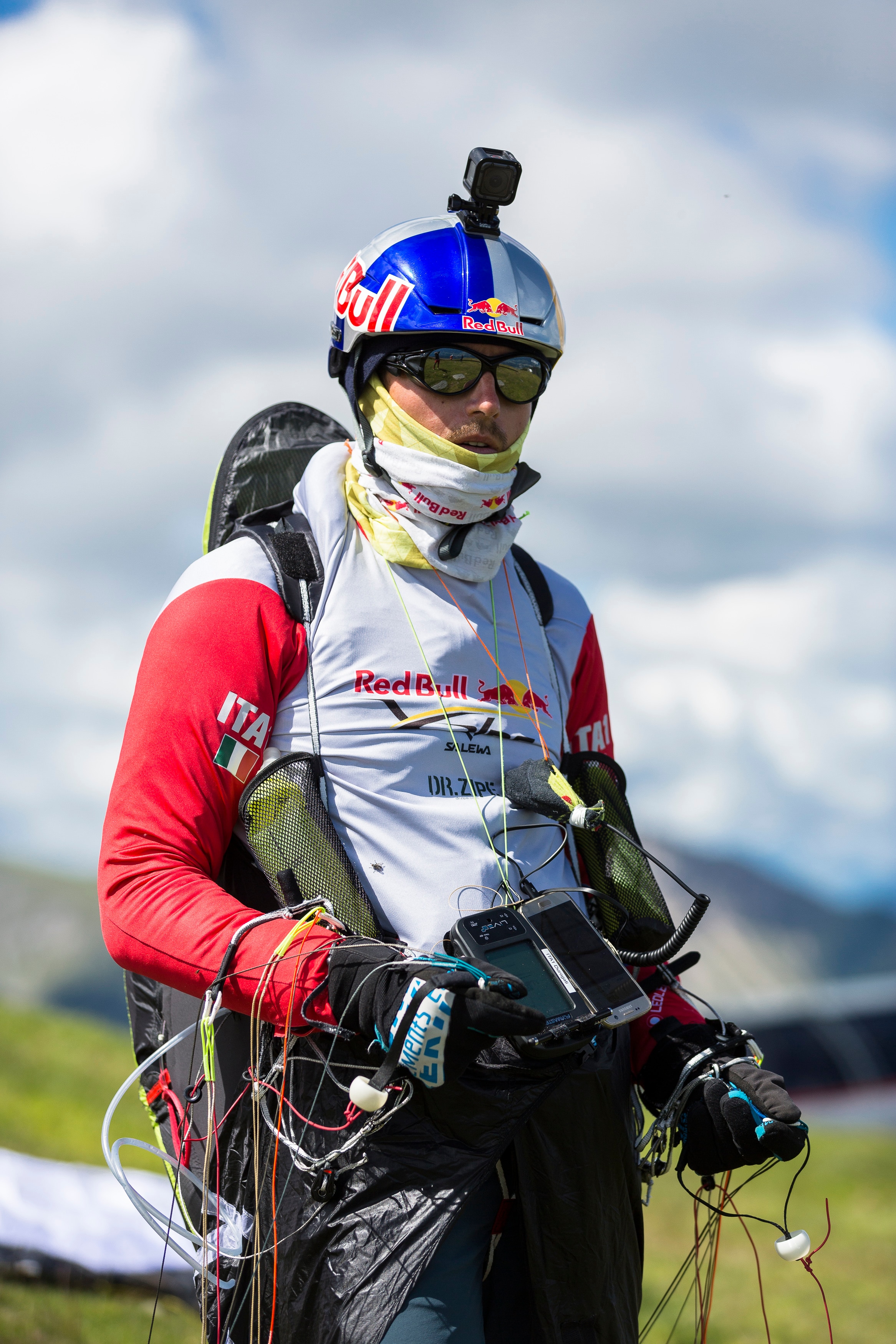 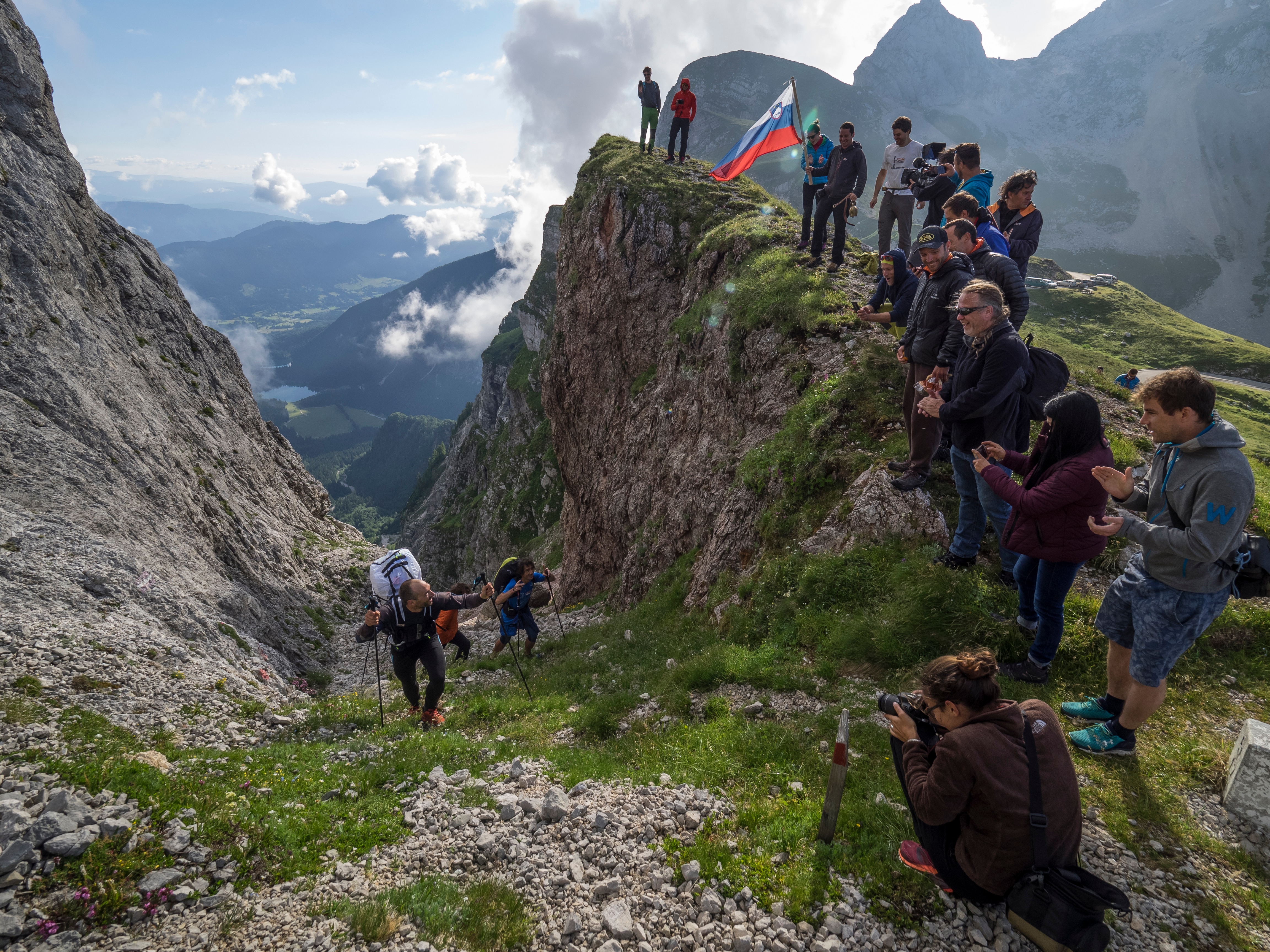 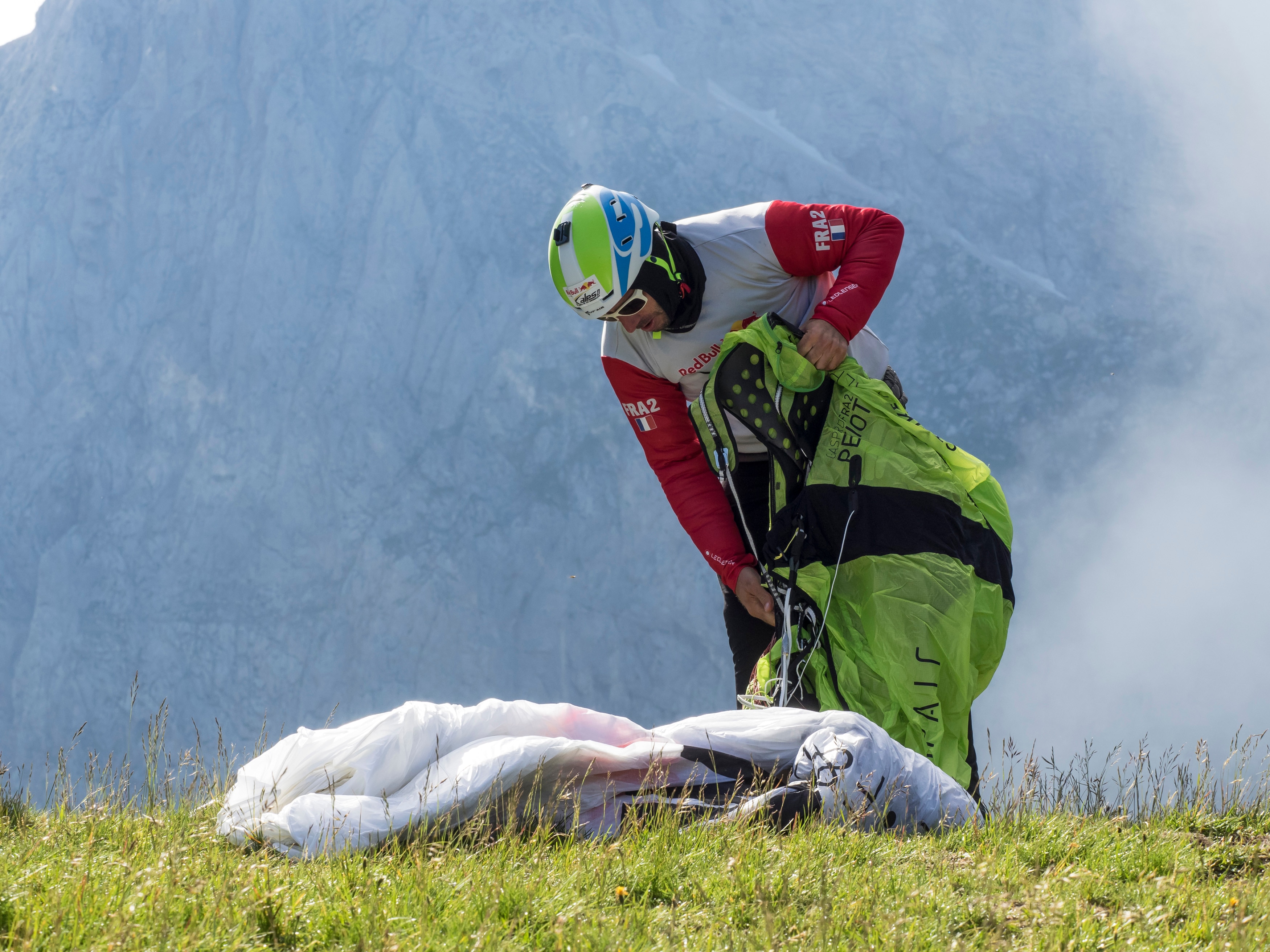 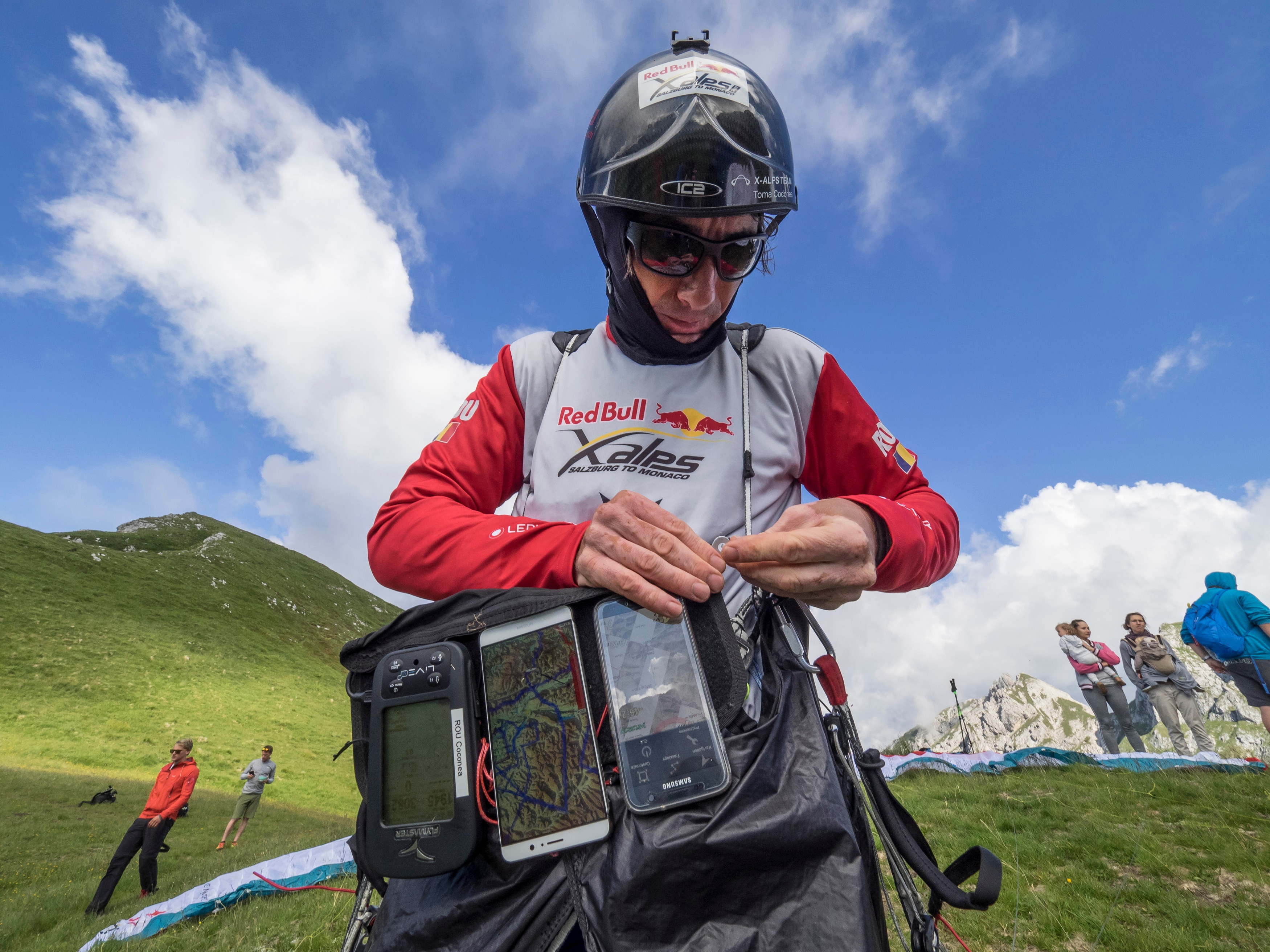 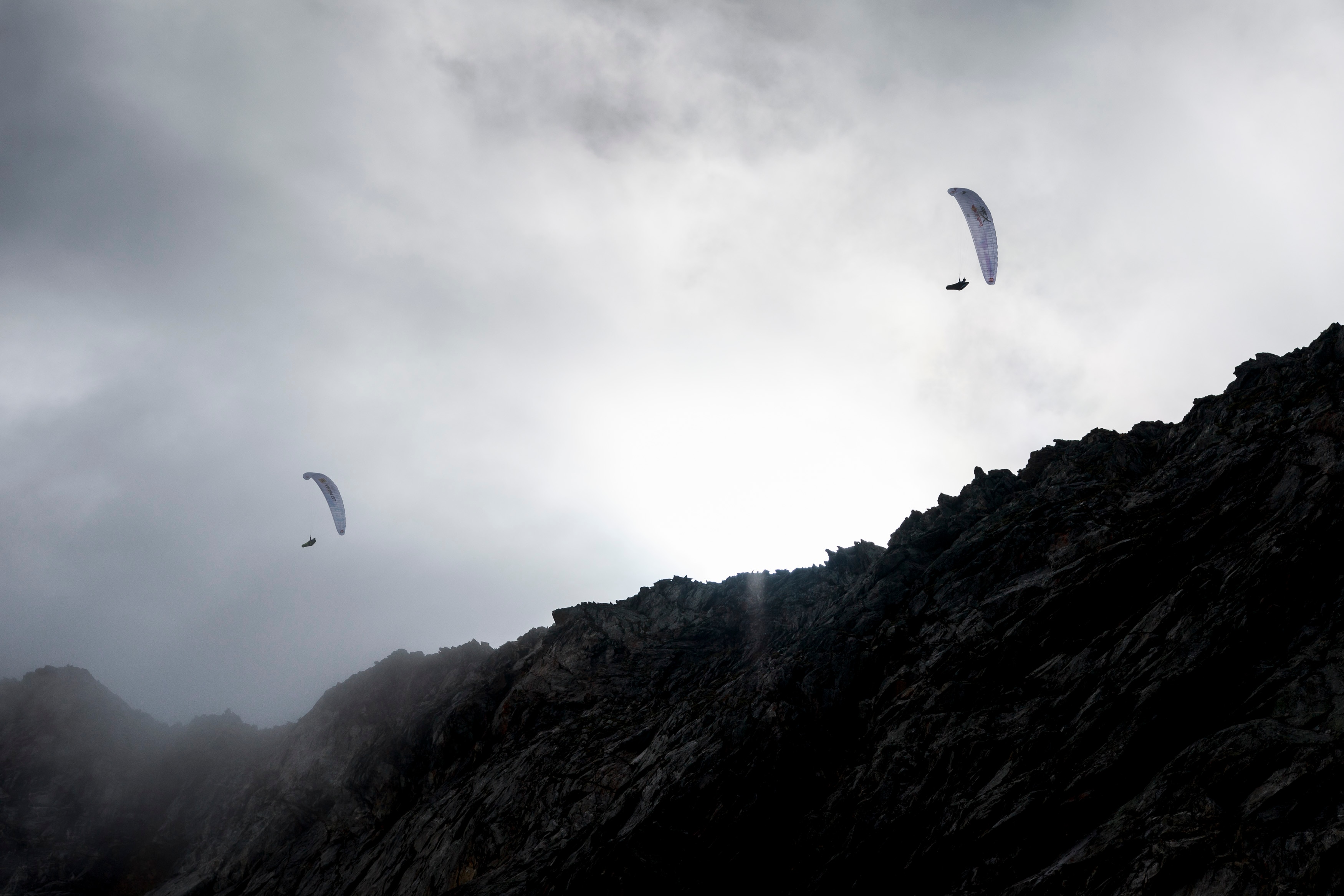 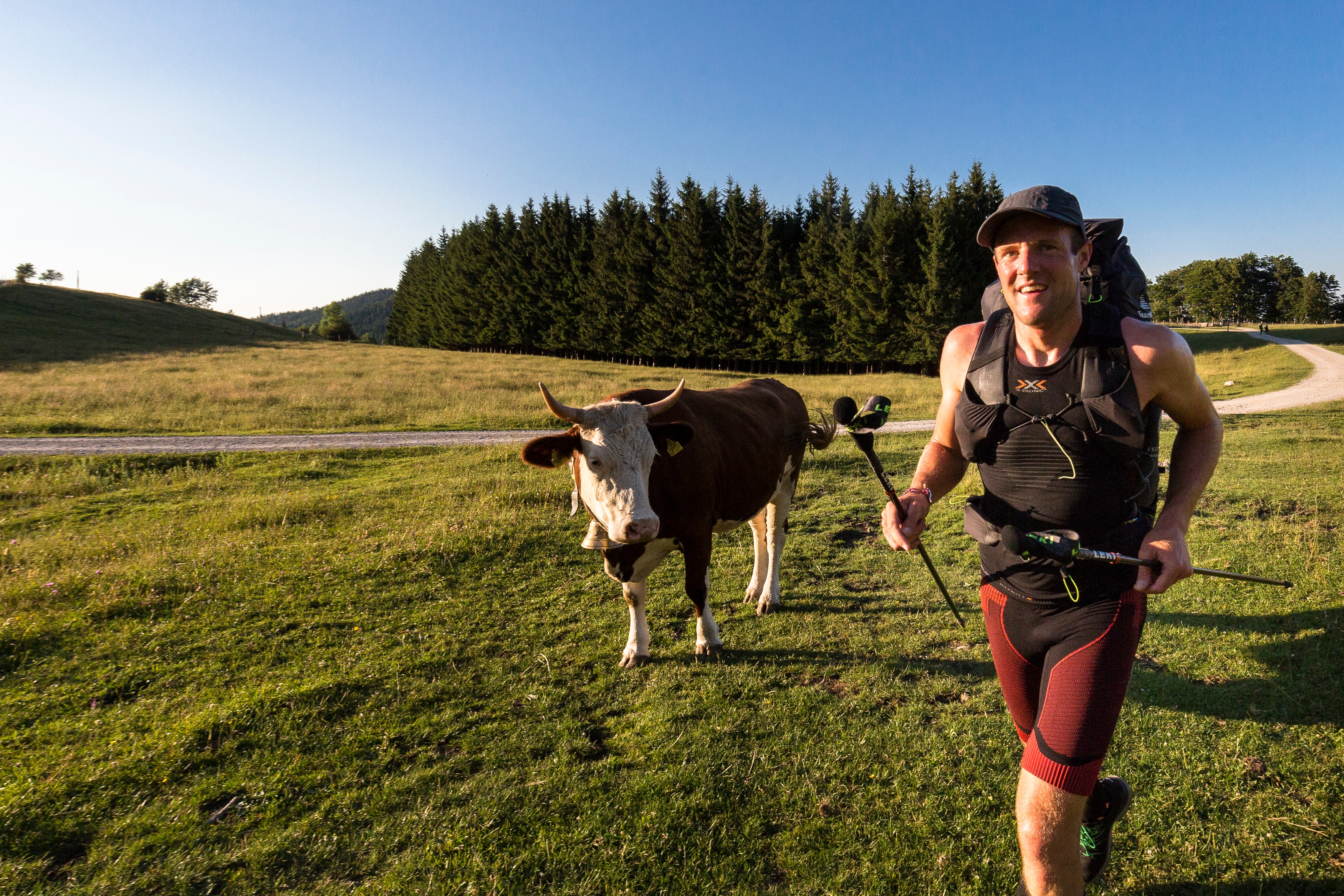 Relive every step in our recap of the greatest moments; from intense battles and mesmerizing live footage to the athlete’s unique insights. This was Day 3 of Red Bull X-Alps 2017!

Day 3 of the race ends with Maurer back where he’s happiest – up in front with the wolf pack desperately chasing him down. Well, he hung with the pack while it was not possible to fly. But as soon as those warm pockets of air started to materialise, everyone knew he’d do what he does best. And that’s a talent for finding himself at the right place at the right time and flying epic lines.

He spiralled down from a clear blue sky and landed next to the sign-in board where he was greeted by crowds of cheering fans. He started early in the morning on the southern side of the Alps, and had hiked and flown for 12 hours, landing shortly before 7pm.

Meanwhile, behind him the French athletes Gaspard Petiot (FRA2) and Nelson de Freyman (FRA3) were enjoying the race of their lives, both completing epic flights over the main alpine chain.

For Petiot, his day began with an 1,300m ascent up Mangart’s northern flanks with Toma Coconea (ROU) to bag Triglav, Turnpoint 2. They arrived with time to spare before the thermals started. <link https: www.facebook.com gaspardpetiot videos _blank>While Coconea signed t-shirts and agreed to fans’ requests for selfies, Petiot was swapping base layers and towelling himself off. “I feel like a tennis player”, he joked.

And the mental pressure was not far off a centre court either. As he agonised at the take-off over whether to fly, he confided to feeling the pressure with everyone watching. Both he and Coconea were playing the waiting game hoping for clouds to clear. In the end, they could wait no longer and launched into the mist. Unfortunately for Coconea, his flight did not last so long and his time at the front was most likely over.

"He saved my life, no question"

<link https: www.redbullxalps.com news article what-happened-so-far-in-day-3.html _blank>Throughout the day, most of the pack cleared Turnpoint 4. Of particular note was Aaron Durogati’s (ITA) rise through the rankings. On day 2 it looked as though he might be forced to retire with a painful knee, but then he got into the air and also showed what he is capable of. He was lying in fifth place with still an hour of flying left in the day, an heroic comeback from the back of the field.

Unfortunately it was not such a happy ending for Stephan Gruber (AUT2) who has retired with severe pain in both ankles. <link https: www.redbullxalps.com news article stefan-gruber-aut2-is-out.html _blank>"I can’t walk and I can’t fly with them”, he said.

Meanwhile at the back, <link https: www.redbullxalps.com athletes profile claudio-heidel-schemberger.html _blank>Claudio Heidel Schemberger (ARG) spent a very uncomfortable and cold night in the mountains and was close to hypothermia and in a bad state by the time his supporter found him at 2am. "He saved my life, no question", Schemberger said later.

But he was determined not to be eliminated by the axeman on day 4 and pulled his Ledlenser Night Pass to fight on through the night – even though he only got three hours sleep the night before.

The battle at the back was set between him, David Liano Gonzalez and Duncan Kotze. One of them would be out by the end of the next day.

And as always we cover you with some stats of the race day:

The real reason to sign up - Part II
What does it take to compete in Red Bull X-Alps?